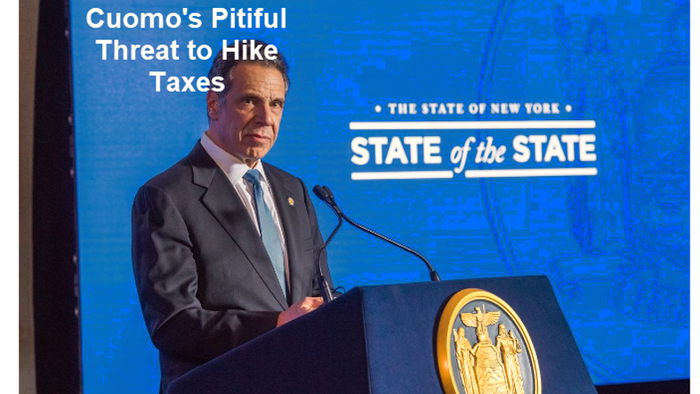 Authored by Mike Shedlock via MishTalk,

New York’s Governor says bail him out or he’ll be forced to punish New Yorkers with tax hikes.

It did not take long for the begging to start.

“If the federal government doesn’t fund state and local governments, it’s going to hurt all New Yorkers,” Mr. Cuomo warned Tuesday while proposing to raise the state’s top income tax rate in New York City to 14.7%. This would be the highest rate in the country, at least until New Jersey Gov. Phil Murphy makes a competing bid.

Mr. Cuomo’s ultimatum goes like this: Democrats in Washington must deliver $15 billion in budget relief pronto or he will raise the state’s top tax rate to 10.82% from 8.82% on income over $100 million and create four new tax brackets on income of more than $5 million. New York City has a top rate of 3.88%, though Mayor Bill de Blasio wants to raise it too.

The Governor says the higher rates would be temporary, but New Yorkers know better than to believe him after he broke his promise to let the millionaire’s tax that Albany imposed during the 2009 recession expire. Mr. Cuomo is also begging Democrats in Congress to lift the $10,000 state-and-local tax (SALT) deduction limit to mitigate his tax hike.

Add these tax increases to Medicare taxes, and some New Yorkers would pay a marginal tax rate as high as 64% under Mr. Cuomo’s plan. Florida Gov. Ron DeSantis may need to set up temporary asylum camps in Palm Beach for the waves of New York tax refugees.

Gratefully, I expect Cuomo's pitiful plea to go straight to the ash pile of requests not delivered where it belongs.

There is not a single Republican senator who will vote to bail out New York, New, Jersey, Illinois or other corrupt states with union pension woes of their own making.

In Search of a Senator

Given the 50-50 Senate split, it only takes one Democrat to stand up to such fiscally mad proposals.

The most likely candidate is West Virginia Senator Joe Manchin.

Also note that Manchin is in a Bipartisan group of senators pushes back on Biden Covid plan.

The bipartisan group of 16 senators held a call with Brian Deese, director of the White House National Economic Council, Jeff Zients, Biden’s coronavirus coordinator, and Louisa Terrell, head of White House legislative affairs on Sunday afternoon — the first of what’s sure to be many conversations between centrists and the Biden administration.

The 75-minute call, set up by Sen. Joe Manchin (D-W.Va.), is one of the first big calls the Biden administration has held as it works to build cross-party support for the $1.9 trillion plan. Senators asked for more data on how the White House filled out its plan.

Susan Collins (R-Maine) pressed the Biden officials on why families making $300,000 would be eligible and urged a focus on lower-income workers.

Manchin is a Democrat senator in the most trump-friendly state. His statements suggest that he will not stray too far fiscally.

King caucuses with the Democrats and if either one of them says "no" to state bailouts, they won't happen.

There might be others. In general, Biden will have a difficult time.

Go Ahead Cuomo, Go Ahead

So, governor Cuomo go ahead. Raise those taxes.

I am curious to see how big the New York exodus will be.  And I always need some new things to write about.