Notty Pine Tavern in Troy closes its doors after 70 years 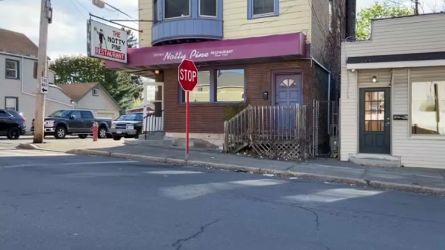 A beloved Troy restaurant is closing its doors after more than 70 years.

Saturday was the last day of business for the Notty Pine Tavern, which sits at the corner of 15th and Hutton Streets. It first opened in the mid 1940's, and is known by many locals for its homemade pizza, sandwiches and burgers.

Since 1987, Notty Pine has been operated by the Zotto family. Many patrons stopped by on Saturday to grab some food and say a final goodbye.

"I love this place because a good friend of mine owns it and I worked here when I was a kid. It's my old neighborhood. And the food is delicious," said long-time patron Wayne Patterson.

"For the past week since we announced that we were closing, every night has been a parade of customers who just have been coming here forever and it's that kind of place. It's got a reputation for being a Troy landmark and those are the people that have been showing up consistently over the years," said Carrie Zotto, wife of the Notty Pine Tavern owner.

Zotto says after Notty Pine closes, her husband, Kevin, is going to take some time to rest, relax and spend time with family.