Coronavirus: What's happening in Canada and around the world on Sunday | CBC News 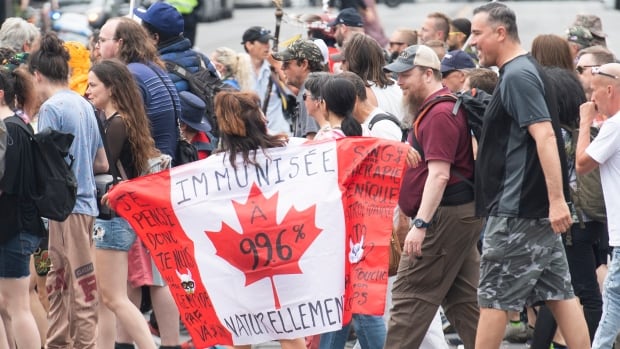 The City of Montreal is easing some pandemic-related restrictions, starting Monday, to allow gyms to reopen and restaurants to offer indoor dining.

The City of Montreal is easing some pandemic-related restrictions, starting Monday, to allow gyms to reopen and restaurants to offer indoor dining.

Even though Montreal and Laval will move into the orange zone from red, more than 1,000 people took part in a demonstration in Montreal on Saturday to denounce public health measures imposed in the battle against COVID-19.

Lucie Mandeville, who helped organize the event, said people in attendance were not against the measures; they only want the freedom to choose which rules they follow.

"I'm here to defend the people that suffer from the measures," she said, adding that it's been a tough year for businesses and people stuck inside.

Health officials in Quebec have administered more than six million vaccine doses after the province reached the five-million mark less than two weeks ago. At least 70 per cent of the population has received at least one dose.

The more transmissible Delta variant of coronavirus, first identified in India, is taking hold in Ontario, and officials are racing to get more people fully vaccinated. Research has shown that one dose of vaccine is only about 33 per cent effective against the Delta variant. 2:03

Clinics across Canada administered more than 374,000 vaccinations on Saturday for a total of just under 26 million doses given to date.

As Canada approaches its COVID-19 vaccination target for a "better" summer, the country's chief public health officer is looking ahead at vaccine benchmarks for fall.

"Every week we're getting closer to our initial target of 75 per cent of eligible Canadians getting their 1st dose of protection, and 20 per cent of those fully vaccinated, summer will be better," Dr. Theresa Tam tweeted on Saturday.

Anita Anand, Canada's procurement minister, says Pfizer has provided the rest of its delivery schedule to the federal government. 1:34

According to a CBC News tally, the figures currently stand at 65 per cent and roughly seven per cent, respectively, as of Friday.

With the country approaching its summer target, Tam offered vaccination hope for a "safer fall."

"The target of at least 75 per cent of eligible Canadians fully vaccinated is needed to protect health system capacity, but it should not be our ultimate goal," she said. "We can do better than that and should keep going and shoot for the stars!"

In British Columbia, more than 72 per cent of adults and nearly 70 per cent of people over the age of 12 in the province have now received their first vaccine shot.

In Alberta, which reported 293 new infections and three related deaths on Saturday, the Alberta Health Services (AHS) says it has physically closed a Calgary church and would prevent access to the building until the church's pastor, Tim Stephens, could "demonstrate the ability to comply with these restrictions."

Over the past week, the percentage of residents whom are fully vaccinated has jumped from six per cent to 9.8 per cent, but the province still needs a significant number of people to get their first dose of a COVID-19 vaccine before the government can lift all remaining restrictions.

Approximately 724,000 people in Saskatchewan need to get a first dose to reach the 70 per cent point for the 12 and over population — a threshold imposed by Premier Scott Moe. As of Friday, more than 657,000 people had received a first dose.

Saskatchewan has rolled out a COVID-19 vaccination program inside schools provincewide to improve access and uptake of the shots in the younger population before the summer break. 2:01

There are now 333 Manitobans hospitalized after getting COVID-19, including 102 in intensive care units.

Sixty-three of those patients are still in hospitals across the province, while another 39 are in ICUs outside Manitoba; according to the province, 36 are in Ontario, one is in Saskatchewan and two inare Alberta.

Manitoba has transferred dozens of COVID-19 patients out of province because intensive care wards in Winnipeg and Brandon are overwhelmed. Now, one of them, a man his 30s, has died in an Ontario hospital. 1:02

Starting on Monday, residents 70 or older, as well as anyone who received a first shot of Pfizer or Moderna on or before April 18, will be able to book their second shot through the provincial booking system.

More vaccine supply is expected to arrive in the coming months, and the province says it could further accelerate the immunization schedule.

As of Monday, those residents can gather without masks. All care home residents living in green zones of the province's COVID-19 response plan will be able to receive up to nine visitors indoors or outdoors.

Those living in yellow zones will be permitted to visit with members of a family bubble, while seniors in communities under the orange alert level can welcome one person at a time.

New Brunswick's vaccination rate continues to increase, but the province is still far from meeting its goals for reopening.

On Saturday, Public Health reported that 475,353, or 68.5 per cent, of eligible residents have received at least one dose of a COVID-19 vaccine, but more than 44,000 people need to be vaccinated by Monday at midnight before the next stage of reopening can begin.

Marion Dowling, P.E.I.'s chief of nursing, says Island vaccine rates are on target, with 60 per cent of its targeted population 12 and over having received at least one dose.

Starting Tuesday, incoming passengers at the Halifax Stanfield International Airport will be encouraged to take a voluntary rapid test.

Atlantic provinces have plans to allow Canadian travellers to come in without quarantine, as long as they're fully vaccinated. It's not far from the concept of vaccine passports, and for Canadians still waiting for first and second doses, it raises issues of fairness. 1:57

Newfoundland and Labrador identified five cases as the province continues to monitor clusters in the Lewisporte and Stephenville and Bay St. George areas.

Nunavut's chief public health officer, Dr. Michael Patterson, says there will be an announcement next week on new rules for COVID-19-affected communities and an update on the territory's southern-based isolation hubs.

What's happening around the world

As of Sunday morning, more than 172.9 million cases of COVID-19 had been recorded around the world, according to Johns Hopkins University's coronavirus tool. The reported global death toll stood at more than 3.7 million.

Senegal could begin producing COVID-19 vaccines next year under an agreement with Belgian biotech group Univercells, a source involved in funding the project told Reuters.

Under the agreement, the Institut Pasteur would use vaccine production technology developed by Univercells to supply countries across West Africa, distributing the vaccines early next year.

African nations are still struggling to acquire shots. On a continent of 1.3 billion people, only about 7 million have been fully vaccinated.

A new political commitment is emerging in African countries to end dependency on foreign suppliers for its vaccine needs, says Dr Richard Mihigo, the vaccines co-ordinator for the World Health Organization in Africa. (AP Photo/Samuel Habitat) 0:54

Taiwan is dealing with a spike in domestic COVID-19 cases, but has a low rate of vaccinations. Only around three per cent of its 23.5 million people have been vaccinated, with most getting only the first shot of two needed.

India reported 114,460 new cases on Sunday, the lowest daily count in the past two months, the federal health ministry said.

As the pandemic is gradually receding, a number of states, except the capital New Delhi, have eased restrictions. The western state of Maharashtra, which was previously hit hard by the virus, will open shopping malls, cinemas, restaurants and offices on Monday in areas where the positive rate for the novel coronavirus has fallen below five per cent.