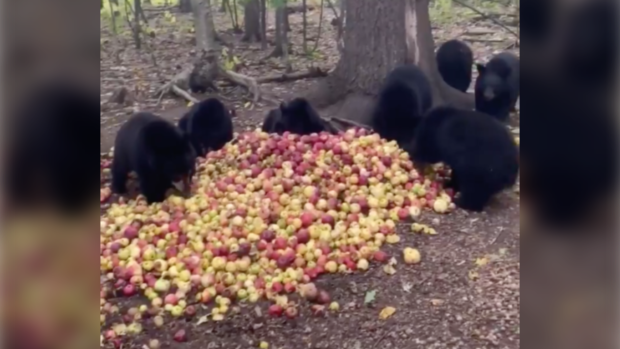 TORONTO -- A group of black bear cubs at a conservation centre in New Hampshire were treated to a massive pile of apples and expressed their enjoyment for the treat by making an audible buzzing sound.

Writer, producer and wildlife preservationist John Fusco shared a video of the cubs at the Kilham Bear Center in Lyme, N.H. on his Twitter account in September after dropping off the apples.

In the video, the bears are seen chomping away at the fruit while emitting what sounds like a humming noise in unison.

"Have you ever heard bear cubs make their 'sound of contentment'?" Fusco tweeted along with the video.

Researchers say the noise is rare, but black bear cubs can make a humming or purring sound when they are nursing or enjoying a favourite food. Adult bears can also make this sound when enjoying food, although at a much lower register.

The Kilham Bear Center, which works to rehabilitate orphaned or injured black bear cubs and release them back into the wild, told the L.A. Times they've seen an increase donations thanks to the attention from Fusco's video.

The video has been viewed over 376,000 times as of Tuesday morning.