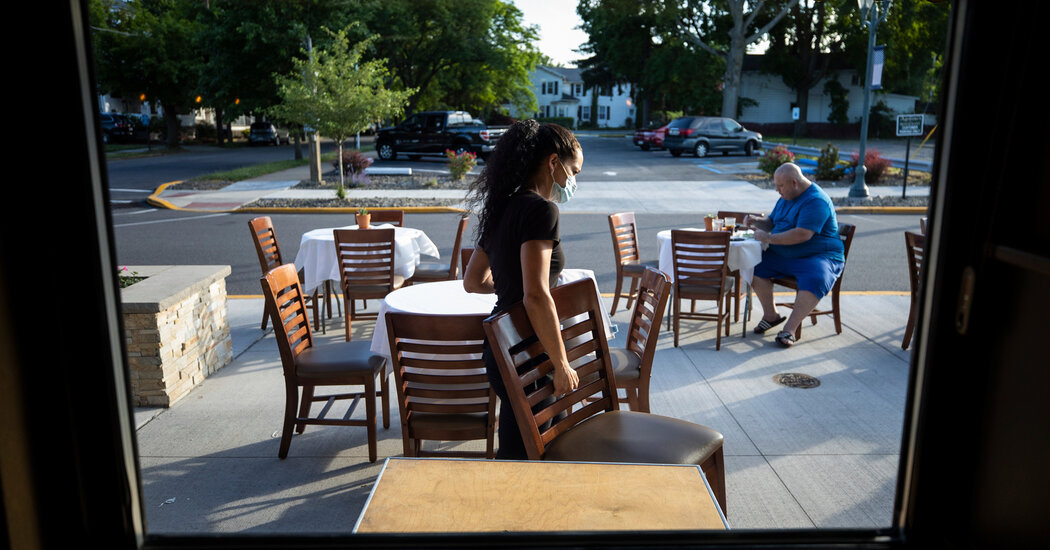 Once upon a time, I thought that it was perfectly appropriate for restaurant workers to earn less than minimum wage. Tipping, in my view, was a means for customers to show gratitude and to reward a job well done. If I wanted to earn more as a restaurant worker, then I needed to hustle more, put more effort into my demeanor, and be a bit more charming.

I thought this even when I was a waitress, working at a burger and burrito joint called Munchies during the summers when I was a college student. Collecting tips gave me a certain satisfaction. I liked sweeping dollar bills and coins off tables into the front pocket of my blue apron. Each time someone left me a big tip, anything more than I expected, a tiny jolt of dopamine flooded my brain as though I had just hit a mini jackpot. I got upset when people stiffed me, walking out and leaving nothing or just pennies — a true insult — but whenever that happened I reminded myself that I might get lucky next time. Or I would do better somehow.

Never did it occur to me that it was fundamentally unjust for me to earn less than the minimum wage and to depend on the good will of strangers in order to earn what was guaranteed by law to most workers. I had no idea that tipping was a legacy of slavery or that racism and sexism had operated to keep women, especially Black women like me, shut out of federal protections for wage labor. I did not question tipping as a practice, though looking back I see that I should have.

The first week on the job, one of my white co-workers, a middle-aged woman from rural Oregon, pulled me aside after she watched a group of rowdy white men, who had been rude and condescending to me throughout their meal, walk out the door without leaving a tip. “From now on, dear,” she said, “I’ll take the rednecks. Just pass ’em on to me.” This became a kind of joke between us — a wink and a nod before we switched tables — except it wasn’t funny. The risk that my race, not the quality of my work, would determine how much I was paid for my services was ever-present.

So was the risk that I would be punished for not flirting with the men I served. Men of all ages commented on my looks, asked me if I had a boyfriend, slipped me their phone numbers, and expected me to laugh along with their sexist jokes. I often played along, after learning from experience that the price of resistance would be the loss of tips that I had rightfully earned.

The truth was, though, that I was shielded from the biggest risk that tipped workers face: not being able to make ends meet. During the summers I spent waitressing, I was living at home with my parents and had my basic needs taken care of. On days when business was slow, and only a few customers trickled in, I was reminded that my situation was not the norm. I remember a co-worker crying at the end of her shift, because she hadn’t earned enough in tips to pay the babysitter. I remember a few of us pooling our tips so another co-worker could buy groceries on her way home and feed her kids.

After I graduated from law school, I became a civil rights lawyer and began representing victims of race and gender discrimination in employment, as well as victims of racial profiling and police violence. But it wasn’t until I read Saru Jayaraman’s book, “Forked: A New Standard for American Dining,” that I learned the history of tipping in the United States. After the Civil War, white business owners, still eager to find ways to steal Black labor, created the idea that tips would replace wages. Tipping had originated in Europe as “noblesse oblige,” a practice among aristocrats to show favor to servants. But when the idea came to the United States, restaurant corporations mutated the idea of tips from being bonuses provided by aristocrats to their inferiors to becoming the only source of income for Black workers they did not want to pay. The Pullman Company tried to get away with it too, but the Black porters, under the leadership of A. Philip Randolph, formed the nation’s first Black union to be affiliated with the American Federation of Labor and fought and won higher wages with tips on top.

Restaurant workers, however — who were mostly women — were not so fortunate. The unjust concept of tips as wages remained in place for them. And in 1938, when Franklin Roosevelt signed the nation’s first minimum wage into law, it excluded restaurant workers, a category that included a disproportionate number of Black people.

In 1966, when our nation’s minimum wage was overhauled, restaurant workers were even more formally cut out with the creation of a subminimum wage for tipped workers. Today, 43 states and the federal government still persist with this legacy of slavery, allowing a tipped work force that is close to 70 percent female and disproportionately Black and brown women to be paid a subminimum wage. A nation that once enslaved Black people and declared them legally three-fifths of a person now pays many of their descendants less than a third of the minimum wage to which everyone else is entitled.

The subminimum wage for tipped workers isn’t simply born of racial injustice; it continues to perpetuate both race and gender inequity today.

In the mid-1960s, the guaranteed wage for tipped workers was $0 an hour. Today, the federal minimum wage for tipped workers is just $2.13 an hour — a just over $2 increase — and a mostly female, disproportionately women of color work force of tipped workers still faces the highest levels of harassment of any industry. Women restaurant workers in states with subminimum wage report twice the rate of sexual harassment as women working in restaurants in the seven states that have enacted One Fair Wage — a full minimum wage with tips on top. The women in these seven states — California, Oregon, Washington, Nevada, Montana, Minnesota and Alaska — can rely on a wage from their employer and are not as dependent on tips and thus feel empowered to reject the harassment from customers.

The unfair power dynamic between women tipped workers and male customers in most states has only worsened during the pandemic. Women restaurant workers report being regularly subjected to ‘Maskual harassment’, in which male customers are demanding that women servers take off their masks so that they can judge their looks and their tips on that basis. With tips now down 50 to 75 percent, male customers know women workers are more desperate than ever.

For Black women, the situation is especially dire. Before the pandemic, Black women who are tipped restaurant workers earned on average nearly $5 an hour less than their white male counterparts nationwide — largely because they are segregated into more casual restaurants in which they earn far less in tips than white men who more often work in fine dining, but also because of customer bias in tipping.

With the pandemic, these inequities were exacerbated; nearly nine in 10 Black tipped workers reported that their tips decreased by half or more, compared to 78 percent of workers overall. All workers were asked to do more for less — enforcing social distancing and mask rules on top of serving customers, for far less in tips. Black workers were more likely to be punished by hostile customers for attempting to serve as public health marshals than other workers. Seventy-three percent of Black workers reported that their tips decreased due to enforcing Covid-19 safety measures, compared to 62 percent of all workers. Technically, federal law requires that employers must cover the difference when the hourly wage, subsidized by tips, does not amount to $7.25 an hour. But in practice, that mandate is frequently ignored. A federal review of employment records from 2010-2012 revealed that nearly 84 percent of full-service restaurants had committed wage and hour violations.

The National Restaurant Association has wasted no time launching a campaign to convince Congress to maintain the subminimum wage for tipped workers and the low minimum wage. This move hardly comes as a surprise. For more than 150 years since Emancipation, the restaurant industry has poured millions of dollars into lobbying elected officials to maintain their exemption from having to pay their workers a fair wage, causing tens of millions of women and men to experience poverty, food insecurity, home insecurity, and inequality over generations. As the Raise the Wage Act moves through Congress this month, the choice is clear: our representatives can choose to roll over to the trade lobby yet again and perpetuate a legacy of slavery, or they can choose to listen to the millions of workers — disproportionately women and people of color who increasingly represent this nation’s future voters — and make history during Black History Month by ending the subminimum wage for tipped workers once and for all.