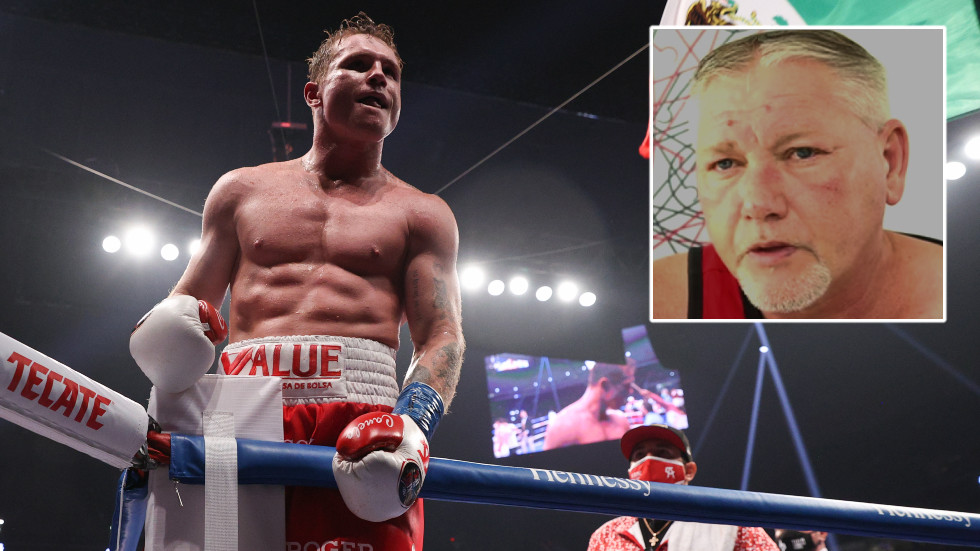 Canelo Alvarez foe Billy Joe Saunders has been mocked after his father, Tommy, claimed that the fighter was preparing to fly back to Britain today because the two sides cannot agree over the size of the ring for Saturday's scrap.

In an apparently emotional interview, notorious wind-up merchant Saunders' dad insisted that the much-anticipated biggest fight of his offspring's career was off, adding that his entourage had been told to pay for their flights home because of an argument centered around 2ft of ring space.

Modern great Canelo is said to want a smaller ring at the AT&T Stadium in Texas, where more than 60,000 fans are expected to watch the pair meet despite Saunders senior warning ticket holders and pay-per-view subscribers to ask for refunds just four days before the scheduled bout.

"The negotiations have broken down, big time," he told iFL, comparing Canelo to a baby having a tantrum.

‼️ Billy Joe Saunders' father Tom Saunders has now said the Canelo fight is OFF over the ring dispute: "There's nothing in the contract about ring size. Negotiations have broke down… They've said it's either 20ft or book your flights home… The fight's off." [@IFLTV]

"I'm not going to let my son box in a 20ft ring against the supposed pound-for-pound king of boxing. They're trying to take his legs away.

"He is adamant he wants to go home. We're not going to take this bulls*** any more.

"Canelo's chucked his rattle, bottle and whatever out of his pram because someone's said no to him."

Don't sign a contract and then come with your demands fight week.

Echoing the fighter's earlier complaints, Saunders seethed that Canelo had initially asked for an "amateur" 18ft ring and moved up to 20ft, while his opponent's team had moved down from a 24ft ring and are willing to accept a 22ft compromise.

He said he was "absolutely gutted" that the fight was seemingly off, strongly suggesting that Saunders' renowned movement would be limited by a smaller ring.

The curious pre-flight flashpoint reminded many fans of the build-up provided by Saunders' close friend and teammate, heavyweight champion Tyson Fury, before he dethroned Wladimir Klitschko in Dusseldorf in 2015.

Sounds like when fury fought for the title in Germany. All mind games. No way the fight is off.

Fury's uncle, Peter, angrily threatened to call that fight off at extremely short notice over a heated argument about the firmness of the ring canvas, making a clear point to Klitschko that he would not have everything his own way.

Saunders believes that Canelo has enforced similar advantages in the build-up to his previous wins over the likes of Briton Callum Smith, jibing that the Mexican megastar would love the opportunity to stipulate that Saunders should fight with a hand tied behind his back.

The wrangle has left Eddie Hearn with work to do to ensure a fight goes ahead during fight week for the second time this month.

Hope not! But I chat to em for years and they’ve always said they’re is so much corruption and politics in boxing! Canelo is just used to having it all. Smith fell into the trap last time

Last week, heavyweight Derek Chisora's mother had to be called to ensure that the Londoner proceeded with his encounter against Joseph Parker after he voiced a series of last-minute complaints.

Fury's bull-headed mindgames paid off against the evidently rattled Klitschko, and team Saunders will be hoping for a similar upset on Saturday.

"I don't think he wants to fight Billy Joe," said his father. "He's seen a few clips of him and he doesn't fancy it.

They should have this stuff written up in contracts. They have to take some responsibility. And where’s the advice to think about this 6 weeks ago? Just playing games, and it’s not what honourable people should be doing especially as it will interrupt the fighters on fight week

"That's what's going to win this fight – his movement. If Canelo gets beat, it's the end of the gravy train for them all. That's what it comes down to."

Fury beat the Ukrainian giant in a ring spanning the maximum 24ft of space. His emphatic victory in the US over Deontay Wilder last year took place in a 20ft setting.

British super-middleweight contender John Ryder, who is due to be on commentary duties for the fight, said he had packed his "gloves, gumshield and boots" in readiness to step in should Saunders go ahead with scuppering the multi-million dollar main event.

So there was no mention of ring size in the contract. Yeah, this is Fury and Klitschko all over again, nonsense really. And if they really are upset over the ring, well, unfortunately for them Canelo is the attraction in this fight. So he will get preference.

"A bigger ring suits him but if it was that important, it really should be stipulated in the contracts and agreed way before fight week.

"His best way of winning is to have a bigger ring and get the movement off. Canelo sees himself as the A-side – he's right to stick to his guns and say no.

"We know Billy Joe likes a bit of fight week antics and I'm sure Canelo's happy to oblige him. [But] they've trained for each other: they both want to fight, they're desperate to fight."

Fans largely agreed. "Sounds like when Fury fought for the title in Germany," observed one. "All mind games. No way the fight is off."