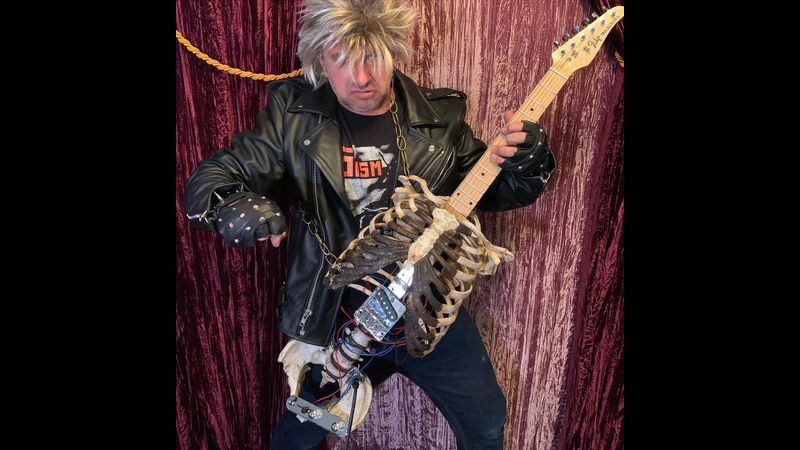 Perhaps by now you’ve heard about the Tampa musician who turned his beloved uncle’s skeleton into a guitar dubbed the “skelecaster.”

Earlier this week, Prince Midnight told the Huffington Post he’d fashioned the recently-recovered bones of his uncle Filip, who died in a motorcycle accident in Greece in 1996, into a functioning guitar as a tribute to the relative who introduced him to heavy metal.

He told Guitar World that the bones were originally donated to a college in Greece, wound up in a grave where his family was paying rent, and that he’d finally been able to bring them to the U.S. after working with the Greek cemetery and the U.S. state department.

“At first, (my mother) said it was sacrilegious and the work of the devil ― you know how moms are,” Prince Midnight told Huffington Post. “But I asked her, ‘Uncle Filip was the biggest metal head of anybody. Where would he rather be? In the ground or shredding?’”

Since then Prince Midnight has been interviewed by the CBC Radio One show As It Happens, telling them a detailed story that included the admission that, yes, “It’s pretty metal to play a guitar made out of skeleton, I have to say.”

The story was later picked up by Australian TV news, Complex.com, Consequence of Sound, Metal Hammer and the AV Club, tweeted by Flight of the Conchords star Jermaine Clement, published by newspapers in Canada and Pakistan and translated into at least seven different languages on international news sites. If it doesn’t show up on SNL’s Weekend Update on Saturday, nothing makes sense.

Man builds guitar out of his dead uncle’s skeleton, uses it to play black metal https://t.co/i5nWgIU32n

Some of the stories even included an old photograph of Uncle Filip doing a little shredding himself.

Now some might say that a story about a guy turning his uncle’s bones into a guitar because “because the Orthodox religion doesn’t want people cremated,” sounds like an obvious hoax. But imagine the effort that would take?

It would require a man masquerading as Prince Midnight, real name supposedly Yaago Anax, making up a detailed backstory about his life as a longtime musician in the Tampa metal scene, and giving multiple interviews in character, going all the way back to a September episode of the local show Grand National Championships.

That would mean he was setting the stage for this for months, including recording an entire EP as Prince Midnight, and getting it on Spotify, and screen printing Prince Midnight merchandise that he posted photos of on Prince Midnight’s Instagram account, which has been actively posting for months — including photos of the cemetery he worked with to recover Uncle Filip — just like his Facebook and Twitter accounts. You’d have to be some kind of comedic savant, right?

Almost finished building a guitar with my uncle Filip’s remains. May he NEVER Rest In Peace! Metal head in life and death! pic.twitter.com/QpzTWZybNr

On top of all that groundwork, this supposed prankster would still have to build an actual functioning guitar out of a skeleton. That can’t be easy. And he’d have to have the audacity to believe that journalists would not see his insane wig as a glaring red flag.

Who would go through all that, just to prank the news?

I mean, sure, there is one guy, Odilon Ozare, the Tampa resident who holds the Guinness world records for world’s tallest hat and longest acrylic nails. Ozare has been similarly accused of creating a fake persona as a dandy hatmaker to get on the news, and he bears a striking resemblance to Prince Midnight, who also bears a striking resemblance to Justin Arnold, the Tampa resident who once pranked tbt* newspaper into publishing a photo of a two-headed alligator on the cover.

That must be a coincidence though, right?

The Tampa Bay Times reached out to “Ozare” Thursday to ask if he knows his fellow Tampa artist, Prince Midnight, or had any thoughts on the craftsmanship of his guitar.